Does your use of marijuana make you drive less safely? According to a new study by the Highway Loss Data Institute (HLDI), “”More drivers admit to using marijuana, and it is showing up more frequently among people involved in crashes,” reported CBS News.

The study is the first to find a link between marijuana use and “real-world crashes.” It was conducted in three states that have legalized recreational marijuana use:  Colorado, Oregon, and Washington. The researchers compared the data collected to collision claims in neighboring states, including Nevada and Utah, which allow only medical marijuana. The HLDI is affiliated with the nonprofit Insurance Institute for Highway Safety (IIHS), a group funded by insurance companies, “which have a vested interest in not having to pay claims and — of course — hold a bias against impaired driving of any kind,” commented CBS News. 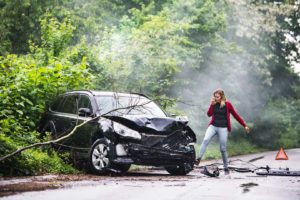 The HLDI study found that the number of collisions in the states that legalized marijuana was three percent higher than in the non-legal marijuana states. “We’re concerned about what we’re seeing,” said Matt Moore, the institute’s senior vice president, told CNBC. “We see strong evidence of an increased crash risk in states that have approved recreational marijuana sales.” The study found crash risks were greater by 16 percent in Colorado, 6.2 percent in Washington and 4.5 percent in Oregon. However, it did not indicate whether the increase was due to collisions that were directly caused by drivers who were high on marijuana.
It is difficult to determine how many vehicle crashes are caused by drivers high on marijuana because most drivers who test positive for THC often test positive for alcohol as well. Moore noted, “We’re concerned about impaired driving in general. Marijuana just layers on top of other impairments like alcohol.”
Another complication for regulators, according to the Washington Post is that, unlike alcohol,  marijuana can be consumed via a variety of methods. While it’s primarily smoked, as the legalization and commercialization of marijuana has spread, cannabis-infused sodas, tinctures, cookies, and candies have become increasingly popular….  Because edible cannabis is absorbed through the stomach rather than the lungs, most researchers suspect that edible and smoked marijuana affect the body differently.
“Detecting and deterring marijuana-impaired driving thus remains a significant headache for policymakers and law enforcement. “
Craig Follis has extensive experience in litigation, negotiating and settling suits, and providing legal opinions on liability and insurance coverage. You can reach him at (888) 703-0109 or via email at cfollis@lawyersva.com.
All Categories