For many years, truck driving was a stable career that plays an important role in the U.S. economy, and brought with it a good income. Truckers are still making their vital contributions to keeping our economy thriving, but for truck drivers, times have changed.  A recent investigation by USA Today of labor violations in the trucking industry found that drivers are overworked, underpaid, and treated like “servants.”

One of the many unfortunate results of these terrible conditions is that rogue companies violate safety regulations that limit the hours allowed for driving without rest periods, and force their truck drivers to work day and night for up to 100 or more hours a week.

As a result, reported the Huffington Post, drivers are falling asleep at the wheel and making their vehicles dangerous to themselves and other drivers. “Truck-related deaths hit an all-time low during the economic doldrums of 2009, when 2,983 truck accidents killed 3,380 people. But as the economy has recovered, the carnage has been on the rise. In 2013, the most recent year for which finalized statistics are available, 3,541 wrecks killed 3,964 people — an increase of 17.3 percent in just four years.” 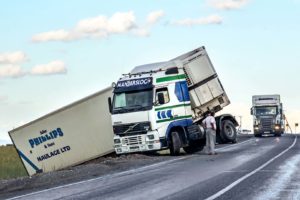 The Huffington Post faults the U.S. Congress for allowing trucking industry lobbyists to try to upend regulations that provide safety for drivers, their loads, and other vehicles sharing the road with big rigs.  Among the lobbyists’ suggestions:  allowing trucks to haul loads heavier than the federal 80,000-pound limit; increasing the size of double trailers from 28 feet to 33 feet, “turning each rig into an 80-foot-long behemoth, as long as an eight-story building is tall”; and “letting” truck drivers to modify their rest breaks and work up to 82 hours a week instead of the already high current 70-hour limit. Other suggestions include reducing labor costs by hiring drivers as young as 18, and keeping secret the federal motor carrier safety ratings for unsafe trucking companies.
If the trucking industry is successful, the changes would overhaul safety rules that have been in place for decades, and “most people don’t know such sweeping revisions are even being considered.”
Craig Follis has extensive experience in litigation, negotiating and settling suits, and providing legal opinions on liability and insurance coverage. You can reach him at (888) 703-0109 or via email at cfollis@lawyersva.com.
All Categories