Can California Stop Distracted Driving with a Law?

Keep your hands off your smartphone while you’re driving. That’s good safety advice.

On January 1, that advice became the law of the land in California, with the passage of a new bill signed by Gov. Jerry Brown in September. “Drivers will be prohibited from holding and operating their phones for any purpose — unless the device is mounted to a dashboard or windshield. Even then, it must be activated with only one finger tap or swipe,” reported Capitol Public Radio. Previous legislation had banned smartphone talking and texting while driving,  but did not prohibit other uses, such as streaming video or using apps like Facebook and Twitter.
According to the New York Times, California’s new rule is part of a larger trend nationwide, in which states are updating their vehicle and driving safety laws to regulate the many varied uses of today’s smartphones.   Jennifer Ryan, the director of state relations for the travel organization AAA, told the Times that California’s provisions were particularly broad, and that it was “definitely a bellwether state.” Most states, however, come up with their own policies and laws independently. 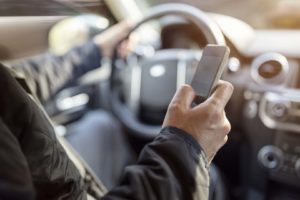 Drivers using their phones to look up information can be more distracted than those making calls, California Highway Patrol Officer Guillermo Garcia told Capitol. “This isn’t just a law that was just passed because we don’t want people using their cell phones. …”We see a lot of collisions that are occurring because of distracted driving.” Distracted driving or inattention is the cause of approximately 80 percent of vehicle crashes, and distracted driving is involved in 3,000 traffic fatalities nationwide, according to the California Office for Traffic Safety.
Can the new law stop distracted driving? Some experts are not convinced. David G. Kidd, a senior researcher at the Insurance Institute for Highway Safety, told the New York Times, “There is evidence that if you do pass a law and have strong enforcement, it can change behavior,” he said. “But we don’t see a reduction in crashes that is consistent with that change in behavior.” His institute focuses more on convincing auto manufacturers to adopt safety technologies such as forward-collision warnings and automatic emergency brakes that are designed to help prevent  front-to-rear crashes. These systems “are not going to reduce driver distraction,” said Kidd, ”but they will help cope with some of the consequences that come with drivers not paying attention.”
Craig Follis has extensive experience in litigation, negotiating and settling suits, and providing legal opinions on liability and insurance coverage. You can reach him at (888) 703-0109 or via email at cfollis@lawyersva.com.
All Categories